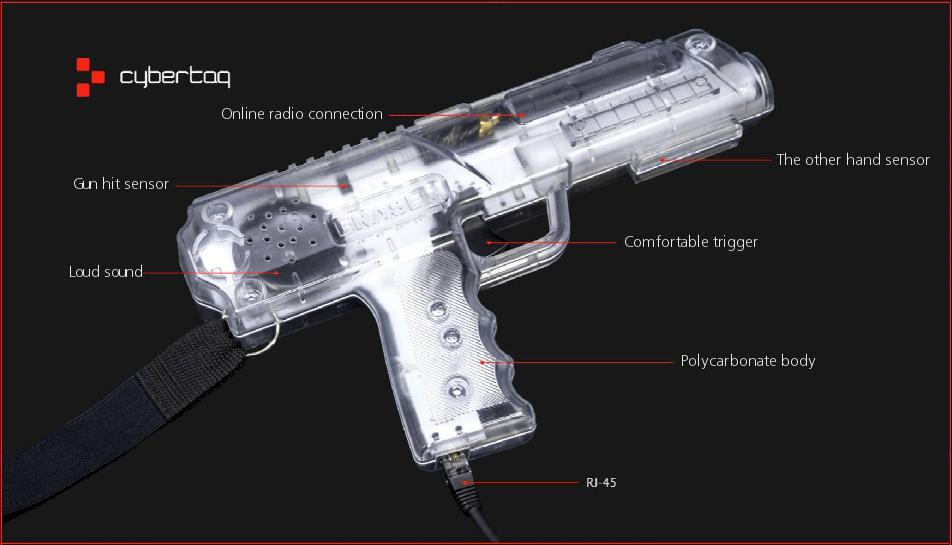 Laserwar is producing outdoor taggers from 2008, but the first Blaster 1.0 arena game kit entered mass production in 2015. At this moment, more than 50 arenas in the world are using CYBERTAG brand equipment.
At the start of the game, each blaster receives its own set of parameters from the command center. That’s why you can set a lot of interesting features for each player: damage factor, rate of fire, separate hit setting for blaster and vest zones and so on.

Here are just some of this Blaster 1.0 technical features:
– Light and strong case is made of transparent polycarbonate.
– All blasters are equipped with vibromotors for feedback effect while shooting.
– Lithium-ion batteries with more than 5Ah a capacity that provide from 8 to 16 hours of continuous play;
– The powerful speaker guarantees high-quality, loud digital sound.
– 10 clear blaster sounds. All sounds are adjustable and can be loaded into the blaster by Wi-Fi. Sounds can be activated depending on playing scenario. The power of the sound is also adjustable by Wi-Fi.
– Amplified radio modules built into the blaster maintains reliable communication with arena control center and provides receiving and processing of statistical data
– 4 Infrared hit sensors installed in the blaster remove the possibility of cheating by closing the sensors during the battle.
– 12 led diodes for a bright glow
– “The other hand” capacitive sensor ensures that the player is holding the blaster by two hands simultaneously. The player can hold the blaster at fore-end or tactical grip. The sensor is equipped with an orange LED indicator. This technology ensures the game safety.
– Safe shotlight system without using a laser.
– Adjustable power of infrared emitter from 1 to 100% allows the game manager to eliminate ricochets in rooms

You can buy these Blasters in our online store.
Also look for 2.0 version