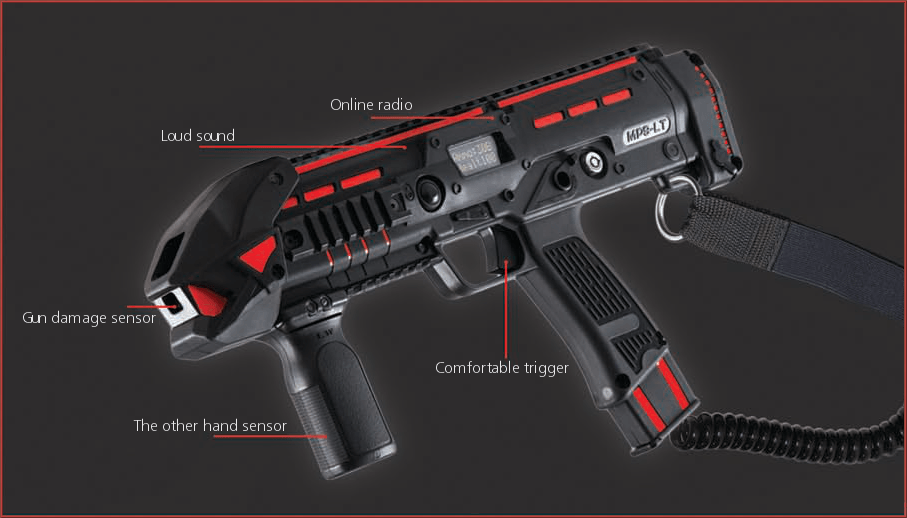 The new 2.0 blaster combines the advantages and operating experience of the previous generation that is used more than at 50 arenas around the world, and innovations of the latest electronics generations.

The unique black body of the blaster with special light elements looks spectacular in arena darkness illuminated by ultraviolet light. The color of these reflective surfaces can be chosen according to arena owner preferences. The ergonomics of this gun is equally comfortable for both children and adults.

One of the main safety rules of an arena laser tag is that the player should fire only by holding the blaster with TWO hands. So, the second-hand sensor now is made using the new technology that provides 100% triggering, even if the player’s hands are sweating during the active game.

The new set now has a number of additional functions, that make the game more colorful, vivid and memorable. The laser designator, which makes aiming easier, will give players the opportunity to feel like superheroes saving the world.  Powerful sound effects and bright lights of blasters and vests will give players unforgettable emotions.

A special soft rubber bumpers of a unique design on the front of the gun protects players from injury in case of accidental collisions and provides reliable protection for a gun optics in narrow corridors.

The updated arena software (Cybertag Configurator) completely controls all game sets and devices of the arena, and displays live statistics on large TV panels. It also has dozens of dynamic game scenarios with the ability to edit them. The game manager can also edit special sound effects, customize design, get fiscal statistics and much more.

You can order arena taggers in our online store.